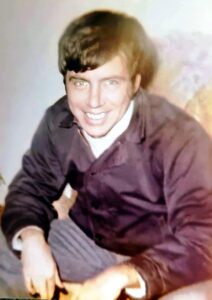 Arthur J. McCue, Jr, 73, of Aston, PA passed away on October 25th at Riddle Memorial Hospital.  He was born in Chester to the late, Arthur and Lila McCue.  He was raised and educated in Boothwyn and graduated from Chichester High School with the class of 1968.  Arthur worked for many years as a conductor for Conrail Railroad until his retirement.  He was a veteran of the United States Navy with whom he served during the Vietnam Era.  He was stationed in Antarctica, New Zealand and Cuba.  He was also an avid sports fan, enjoyed John Wayne movies, hunting and taking trips to the beach with his family.

In addition to his parents, he was predeceased by his wife, Barbara J. McCue (2022) and his sister, Karen Gould (2002).  He is survived by his son, Arthur J. McCue, III; grandson, Christopher Doyle; step-children, Debi Mena-Cintron, Terri Ciuffetelli, Anzel “Duke” Norman, Charlene Goodwin; sister, Wendy Cooper (James); 9 grandchildren, 12 great-grandchildren; nephews, Brendan, Sean, and Brian; niece, Kristy.; many cousins; beloved cat, Nicole.  His funeral Service will be held on Friday, November 4th at 12pm at the Joseph A. Ward Funeral Home 1459 Market St. Linwood, PA.  Friends and family are invited for visitation from 11am -12pm.  Burial will be private