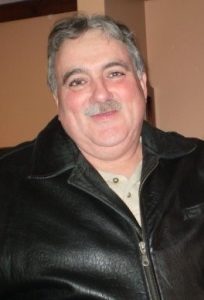 Daniel J. McKenna “Moss” and “Ice Pick”, 62, of Aston passed away on Thursday, November 4th at Crozer Chester Medical Center.  He was born in Chester, PA to the late Robert O. and Mary McKenna (nee McGeehan).  He was raised and educated in Aston and was a graduate of Sun Valley High School with the class of 1978.  Dan loved to read novels especially his favorite authors James Michener (“Chesapeake”), Leon Uris (“Trinity”) and Frank McCourt (“Angela’s Ashes” and “Tis”), which depicts the history and culture of the Ireland and the Chesapeake Bay areas.  He was a great storyteller himself. He could spout off details verbatim of the rich history and legends about Ireland and was happy to state that the McGeehan (mother’s maiden name) family was of the “Black Irish” from the area of Lough Swilly, and Donegal, County Mayo.  Lough Swilly in Ireland is a glacial fjord or sea inlet lying between the western side of the Inishowen Peninsula and the Fanad Peninsula, in County Donegal. Maybe the history of our forefathers being fishermen is why Danny loved to fish himself. He would fish at Quarryville, PA, Fortescue, Delaware Bay, Donne, NJ and many other areas around Delaware County especially the Chester Creek by Bridgewater Road. His favorite meal was eating blue claw crabs. He would frequent the Tap Room, Bo Brooks, Connolly’s, Lefty’s and many other area local places that offered his favorite crustacean. His most enjoyment in life was playing and watching basketball. He frequented the Palestra.  He played in many leagues throughout Delaware and Chester County until he fell ill and could no longer do so. Also, he followed all the local high school basketball teams’ statistics and could quote many team members, which high school and college they attended. Dan was a bit of an “old school” soul and really didn’t connect to this new world of technology. He would rather write you or receive a letter himself. He was very fond of his nieces, nephews and his friends whom he loved dearly.

Dan was a long-time member of St. Joseph’s Catholic Church in Aston, PA.  He was also a Fourth Degree Knight of The Knights of Columbus Council the Fr. James A. Donnelly Council # 11782.

His funeral mass will be held on Wednesday, November 24th at 10:3AM at St. Joseph’s Church in Aston, PA.  Friends and family are invited for visitation from 9:30-10:30AM in church.  Inurnment will follow in SS Peter & Paul Cemetery.