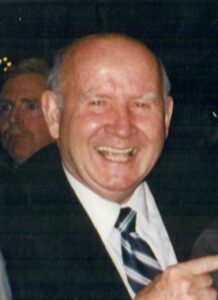 Born in Philadelphia to the late James J. and Blanche M. (nee Sheehan) Murray, he was
raised in Norwood. He was a proud graduate of St. James Catholic High School for Boys,
class of 1950.
An Electrician by trade, he retired from IBEW Local 654. He was the owner of the Liberty Tavern.
A fine athlete in his younger days, he was a member of the Delaware County Athletic Hall of Fame.
His favorite teams were the St. Louis Cardinals, New York Giants and University of Notre Dame.
He really enjoyed owning the Liberty and all the friends and customers he enjoyed talking to. He
liked watching College Basketball and John Wayne movies.
He was preceded in death by his wife of 46 years, Rose Marie (nee Connor) and daughter
Colleen/Kelly.
Survivors: Children Dennis, Patrick, Rose Marie/Missy (Late Terry Lansing), Theresa,
Joseph (Elizabeth), Daniel Jr. (Charlene). Grandchildren Patrick, Sarah,
Daniel III, Maura and Megan. Two Sisters Margaret and Marian. Several
Nieces and Nephews.
Service and burial will be private. A celebration of life will be held at a later date.