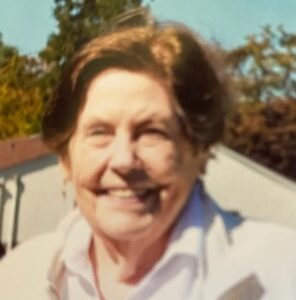 Elsie Beatrice Czajka, 92, of Brookhaven passed away on Saturday, May 7th at her home.  She was born in Lancaster County and was raised and educated in Philadelphia where she graduated from Lincoln Prep.  She was raised in a house on Front Street on which the ground floor was the family pet shop.  It was here that she developed a love of animals that lasted her lifetime.  Bea met her husband of over 30 years while helping his mother, who lived around the corner from her home.

Following her husband’s discharge from the navy and their marriage, they moved to Delaware County, where they raised their family. Bea worked for many years as a buyer for Grant’s and as an office manager for several different hardware stores.  Her and her husband were active with the scouts of Delaware County and well as being a very active member of St. Paul’s Episcopal Church.  For years Bea managed the boys’ choir and was a member of the alter guild. For many years, Bea and her husband were chaperones for the choir for a yearly week retreat in Stone Harbor NJ.  It was during this time that she grew to spending as much time as possible at the beach with her friends and family.  She also took time to travel with family and friends throughout the United States.

Bea was a loving mother, grandmother, and great-grandmother. She was predeceased by her husband, Edward Czajka (1979) and her daughter, Eileen Gordon (2006).  She is survived by her sons, Edward (Cheryl), and Richard (Pam); daughter, Carol Czajka Roberts (Robert); 12 grandchildren, 13 great-grandchildren.

Her memorial service will be held on Friday, May 13th at 10 am at the Joseph A. Ward Funeral Home 1459 Market St. Linwood, Pa.  Friends and family are invited for visitation from 9-10 am.  Burial will follow in Mt. Hope Cemetery, Aston, PA.