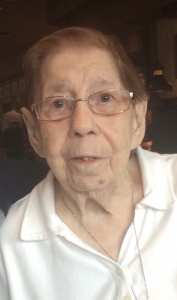 She was born on April 10, 1924 in Vallecillo, Nuevo Leon Mexico.  She was raised in Mexico and came to the United States after marrying Army veteran, Clarence Samuel Emerson, Jr. on June 4, 1964 in El Paso, TX.  She was a home maker who enjoyed cooking and caring for each of her grandchildren and great-grandchildren.  She was an avid baseball fan.  She loved cheering for her favorite team, the Atlanta Braves, and never missed a game.  She also never missed a Phillies game, even though she cheered against them.

Graciela enjoyed American politics and was overjoyed when she took the oath to become a US citizen in 2001.  Her family will remember her as the matriarch who was proud of her Mexican heritage and of the opportunities that the United States gave her.

The family would like to thank her physician, Dr. Andrew Myers, for his many years of expert care.  They also sincerely appreciate the compassion provided by Delaware Hospice during her final days.

Friends and family are invited to her viewing on Friday, February 5th from 10-11am at the Joseph A. Ward Funeral home 1459 Market St. Linwood, PA 19061.  A graveside funeral service and burial will follow in Glenwood Memorial Gardens, Broomall, PA.  Donations in her name can be made to Delaware Hospice at Donate – Delaware Hospice