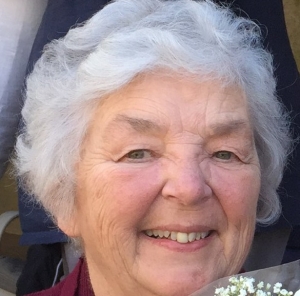 Patricia (née: Crielly) Van Horn passed away peacefully at her home on Friday, May 8, 2020. Patricia was born and raised and lived for 83 years in Chichester, Pennsylvania. She was a 1954 graduate of Notre Dame High School for Girls in Moylan, PA. While Pat’s primary career was raising her 8 children she also worked as an administrative assistant for the Helen Keller National Center and later at the Media Courthouse.

As a grandmother of 11, G-mom was never happier than when she was watching her grandchildren compete and perform. From football, basketball, baseball, softball and lacrosse to volleyball, soccer, field hockey, horseshoes, swimming and theater, she rarely missed an opportunity to be there to support her grandkids. Pat Van Horn was a founding member of St. John Fisher Parish and was active at Holy Saviour School where all 8 of her children attended.

Due to the current precautions to quell the spread of COVID-19, funeral services will be private. In honor of Patricia Van Horn, donations are being accepted by Covenant House, 5 Penn Plaza, NY, NY 10001, or Martha’s Marketplace Food Pantry at Catholic Social Services, 130 E. 7th St. Chester, PA 19013. Also the American Red Cross will be sponsoring a blood drive (by appointment) at St. Cornelius Parish in Chadds Ford on Thursday, May 28, from 2-8 pm.