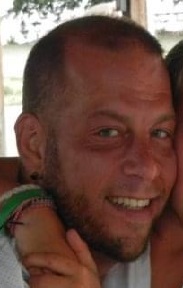 Ronald J. “Ronnie” Koch, 48, of Chester passed away on Friday, October 23rd at Crozer Chester Medical Center.  He was born in Woodbury, NJ and raised and educated in Blackwood.  He graduated from Highland High School with the class of 1990.  Ronnie was a veteran of the US Marine Corps.  He worked for many years for HA Harper & Sons before retiring early on disability.  Ron was extremely artistic and was a huge fan of Philadelphia sports, especially the Flyers and the Eagles.  Ron worked alongside of the first responders at ground zero during the attacks on 9/11 delivering supplies.

He was predeceased by his daughter Talia Noelle Mayka and his maternal grandparents, Kermit and Doris Snyder; nephew, Dennis Lee Borders III.

His funeral service will be held on Sunday, November 1st at 3 pm.  Friends and family are invited to call from 2-3 pm at the Joseph A. Ward Funeral Home 1459 Market St. Linwood, PA. Please feel free to dress in Philadelphia sports attire. Burial will be private.