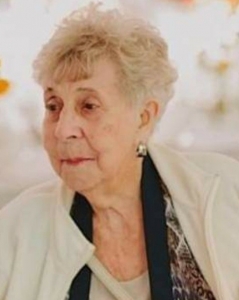 Thelma P. Mader (Collins), 91, of Aston, PA died on July 7th, 2021 peacefully at home.  She was raised in Marcus Hook and spent the last 69 years of her life in Aston.  After raising her own children, Thelma spent many years babysitting children in her home.  She enjoyed going to the casinos, watching the Phillies, and spending time with her family, especially her grandchildren and great-grandchildren.

She was predeceased by her husband, Edward J. Mader (2011), parents, Harry and Pauline Collins; brothers, William, Donald, and Ralph; sisters, Frances and Deborah.

Her funeral services and burial will be private.  Donations in her name can be made to Compassionate Care Hospice of Media, 600 N. Jackson St. Suite 103 Media, Pa 19063.