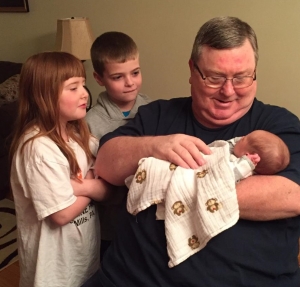 Thomas (Tom/Danny) Daniel McDonald, Jr. of Boothwyn, PA died after a courageous battle with cancer on February 2, 2021 at the age of 70 at Mercy Fitzgerald Hospital in Darby, PA.

Born in Chester, PA, Tom was a graduate of St. James High School for Boys in Chester, PA, where he was lovingly referred to as “Specs” because of the glasses he wore.  A few months after graduation, Tom began working at the Scott Paper (Kimberly Clark) plant in Chester, PA where he remained employed until his death.

A Veteran of the US Army, Tom received orders to be deployed to Korea in 1971 to serve as a medic in the Vietnam War. After his time in Korea, he was placed on the reserves list until he was honorably discharged on May 1, 1976.

Tom married his first wife Jaqueline Stoddard on March 20, 1976, and welcomed two children into the world: Heather Kline and Thomas Daniel McDonald, III. They remained together in their Boothwyn home until Jaqueline’s death in 1984.

In September of 1985, Tom married Rita Bonhage, and they had two additional sons, Sean and William. For the last 10 years, Tom and Rita have been raising their oldest grandchildren, Mason and Mila.

Tom McDonald never met a bird that he didn’t like. Well, except crows. He would spend hours outside on the porch with his children and grandchildren watching birds and deer. He taught his kids how to fill the bird feeders, what kind of food each bird liked (especially the Blue Jays with their peanuts), and ways to attract even the most exotic birds to his Delaware County back yard.  Tom also loved to fish, and enjoyed taking his children, grandchildren, nieces and nephews fishing whenever he was able. He looked forward to the summer so he could visit his favorite vacation spots in the mountains of Pennsylvania, where he could be surrounded by the various wildlife.

Tom had a love of classical music, Motown, Earth Wind and Fire, and a weird obsession with one hit wonders like Who Let the Dogs Out and Hot In Here. He was an avid baseball and football fan, and rarely missed any games. Each Friday night, Tom and Rita would have a movie night with Mason and Mila, becoming one of the only times the children got to choose what was on TV.

A natural prankster, Tom loved to play jokes on his loved ones and work colleagues. From pretending to be a baby calling his niece Jamie, to fighting for the control of the television with toddler-aged Mason, to eating Mila’s munchkins one time and never hearing the end of it, he was always having fun with those he loved. He particularly loved being with the newborn members of his family and loved watching them grow. Always wanting to keep magic alive in the eyes of children, Tom would frequently play the role of Santa Claus, and would call his grandchildren, nieces, and nephews on Christmas Eve to get them excited for the big day.

Tom will always be remembered as a generous soul who would help anyone who asked, and even those who did not.