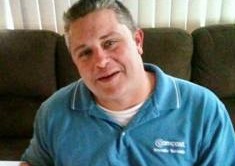 Thomas James McGarvey, Jr., 45, of Boothwyn passed away on Tuesday, September 15th at his home.  He was born in Media to Thomas and Beverly Johnson McGarvey.  He was a graduate of Garnet Valley High School with the class of 1994.  He later went on to graduate from Widener University with a degree in Criminal Justice.  While at GVHS, Thomas played football and continued throughout his life to be an avid sports fan, especially of the Philadelphia teams and Notre Dame football.  Tom was also musically inclined.  He taught himself to play guitar and enjoyed going to concerts with friends.

His burial and funeral services are private and intended for immediate family only.

In lieu of flowers, donations can be made to Tom’s GoFundMe page @ http://gf.me/u/yzjvbx