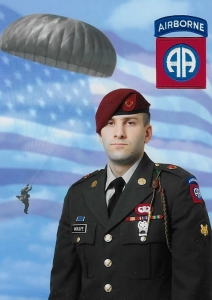 He graduated from Coatesville HS in 2007. He enlisted in the US Army and served from 2007 to 2011 with the 82nd Airborne in Afghanistan.

He was a good, kind, funny and loving man whose family came first for him. His loves included: sports, gaming, the beach, snowboarding and music.

Travis leaves behind so much love and support. He was a veteran. He was a father. He was a son. He was a brother. He was a best friend. He will always be “is” in spirit, just no longer with us in the physical world. Our family is there to greet him and surround him with love. He will never be alone. Soldiers and civilians, please remember somebody loves you, don’t choose to leave them behind, choose to get help.

Family and friends are invited to attend his committal service with military honors on Thursday, December 26th at 11:30am at Florida National Cemetery in Bushnell 6502 SW 102nd Ave., Bushnell, FL 33513.