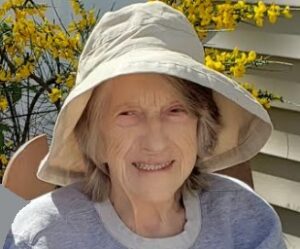 Catherine attended a one room schoolhouse in Kennett Square, PA, completing grades 1 through 8 before leaving to help her parents support her 8 younger siblings.  Working at a factory in West Chester in her early 20s, she completed a nurse’s aide course at Sacred Heart hospital in 1960 and continued to work at the hospital until she retired in 1988.

Catherine was very active in her local community, spending 80 years involved in the Boothwyn area.  A member of the Upper Chichester Seniors Club, she was awarded a lifetime achievement in 2017 for 40 years with the club.  As a staunch supporter of the Delaware County Republican Party, she worked the polls for voting until 2016, holding the title of Inspector of the Polls.  She retired from that position at the age of 92 stating “I worked the polls for close to 30 years, it’s time for someone else to do their civic duty”.  During the 2020 presidential election, at age of 95, she took her walker two blocks to cast her vote.

A lover of antique cars, Catherine was a member of several automobile clubs, including Brandywine AACA of Delaware, Hershey Antique Club of America, Historical Vintage Car Club of Delaware, Havertown Vintage Car Club, Active “A’s” of Chester County, and the Model A. Restorers Club of America. She was a member of the Delaware County Navy Mothers from 1960-1963, and a member of the Lady’s Auxiliary of Reliance Hook and Ladder in the late 1970s.

Catherine lived a long full life doing the things she loved to do.  Placing a great importance on being independent, and to keep active; participating in her activities for as long as she was capable.

Her passing was preceded by her son Milton “Buddy” Clark, her daughter Josephine Griffen, and her husband John Clark.  Surviving family includes her children John Clark Jr, Carole A Walz, and Barbara J Bruni, as well as a living legacy of 15 grandchildren, 35 great grandchildren, and 22 great – great grandchildren.  Until her death, her family had 5 living generations.

A Funeral Mass will be held at Saint John Fisher Church 4225 Chichester Avenue, Boothwyn, PA on Saturday September 17th at 10:30am.  Friends and family are invited for visitation from 9:30am-10:30am in church. Burial will follow in Chester Bethel Cemetery on Folk Road.  Repast will be held at the Concordville Inn following the Burial.  In lieu of flowers, donations in her name can be made to St. John Fisher Church or to the Upper Chichester Senior Citizens Club.