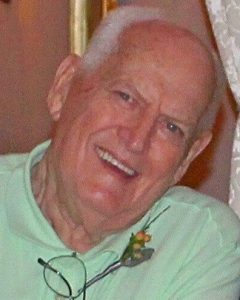 John S. Powell, age 87, of Chestnut Ridge, Wallingford , “rode off into the sunset” from this world, like his beloved Western movie heroes on October 4 at Crozer Chester Medical Center. Affectionately known as “Wacky” by his family and friends, he was born and raised in Eddystone. A proud “‘Stoner”, John excelled in high school athletics achieving letters in four varsity sports. After marrying his high school sweetheart, Nancy Hester in June 1955, he enjoyed 63 years of wedded bliss living most of their years in Linwood, until her passing in 2018. He was employed by the Scott Paper Company for close to 40 years once traveling to Japan to offer his expertise in mill operations. John also played semi-pro football for Marcus Hook AA, was a member of F & AM Concord Lodge 625, and coached youth football for the Chichester Crusaders. Above all, John will be remembered most as a loving and supportive son, husband, father, grandfather, and friend. His unselfish manner and willingness to do whatever he could for those in his circle will remain as his imprint on the world. A strong and quiet man, John made life better for everyone he touched, with his love and humanity. In addition to his wife Nancy, John is predeceased by his son Timothy Scott Powell, his parents, Norris and Ellen Powell, brothers George, Sonny (Norris, Jr.), and Billy( H. William) Powell, and friend Barbara Cleveland.

Visitation will be held at Ward Funeral Home in Linwood on Saturday October 9, 2021 from 10am to 11am. A brief service will follow to honor John’s legacy. Burial will be at the family’s convenience at a later time. The family wishes that no flowers be sent and that donations be made to St. Jude’s Hospital for Children or the SPCA